More information about the event and speakers here! 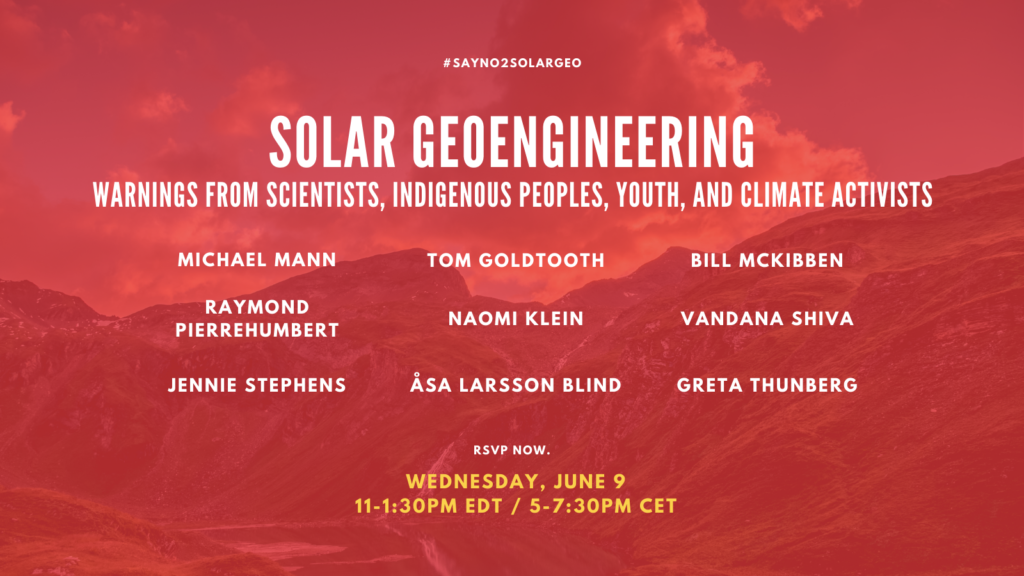 STOP SCOPEX –
Solar geoengineering IS NOT A PLAN B

The argument that it can be a “plan B” to address climate change is a dangerous illusion that distracts society from the only way forward: cutting emissions to zero.

Solar geoengineering is a technology we will never be able to control, with likely unacceptable risks and unintended consequences.

The Saami Council together with Swedish and international civil society and scientists recently forced the cancellation of a Harvard-based solar geoengineering project planned for Northern Sweden.

We must ensure that neither this SCoPEx project nor any other such solar geoengineering project is allowed to normalise this dangerous technology – anywhere.

All focus must be on stopping emissions and closing down the entire fossil fuel industry. Now. There is no plan B.

This website provides arguments, facts and materials from the Swedish fight against SCoPEx in Northern Sweden, and resources for continuous and scaled up mobilisation against advancement of solar geoengineering anywhere in the world.

See also Geoengineeringmonitor for more information about solar and other kinds of geoengineering technologies.

Letter to Harvard University by the Saami Council calling for the shutting down of the SCoPEx project.

Read this recent letter by the Saami Council, co-signed by indigenous peoples organisations around the world, calling for Harvard to shut down the SCoPEx geoengineering project.

Individuals and organisations around the world can express their support by signing up on the Saami Council website.

The letter begins with::

Indigenous Peoples’ put our relationship with nature and our environment at the center. We are taught to take a holistic approach in all we do because everything on earth is interlinked to each other. Functioning ecosystems requires nature and its resources to be managed with great care for it to be preserved and passed onto future generations.

Climate manipulation strongly contradicts our understanding and experience of how to respect and live in harmony with nature, and therefore, this technology is not something we see as a part of our chosen future.

We, the signatories of this letter, call on Harvard University to shut down the SCoPEx project. As representatives of Indigenous Peoples, we do not approve legitimizing development towards solar geoengineering technology, nor for it to be conducted on our lands and territories anywhere.

Read the letter and show your supportat the Saami Council website 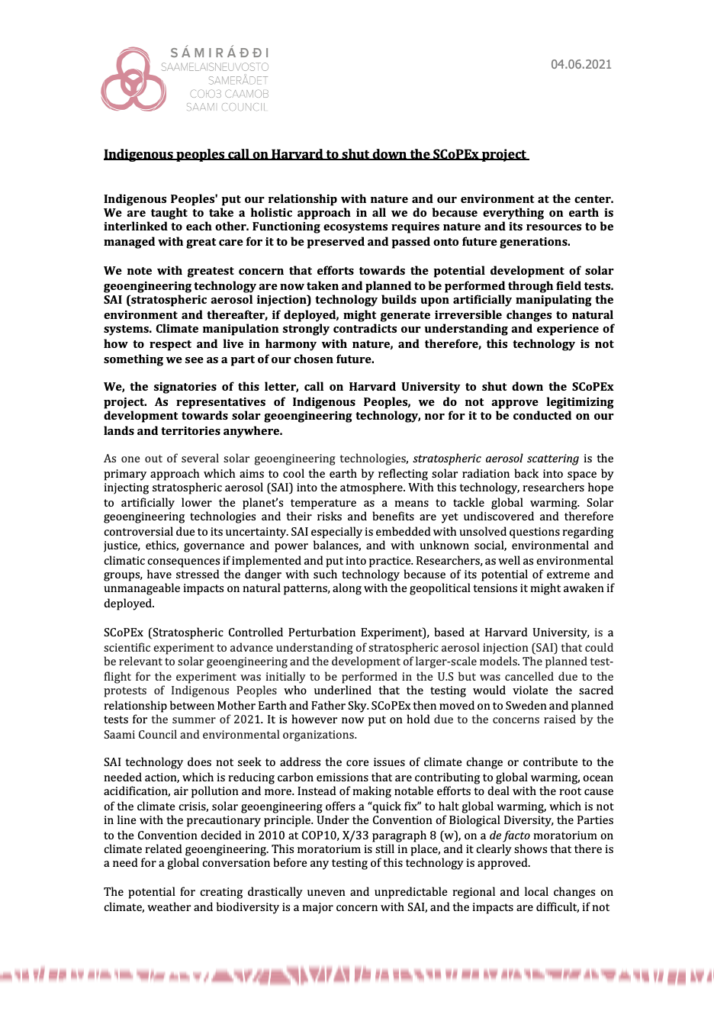 What is solar geoengineering and what are the problems?Check out this 5 min video 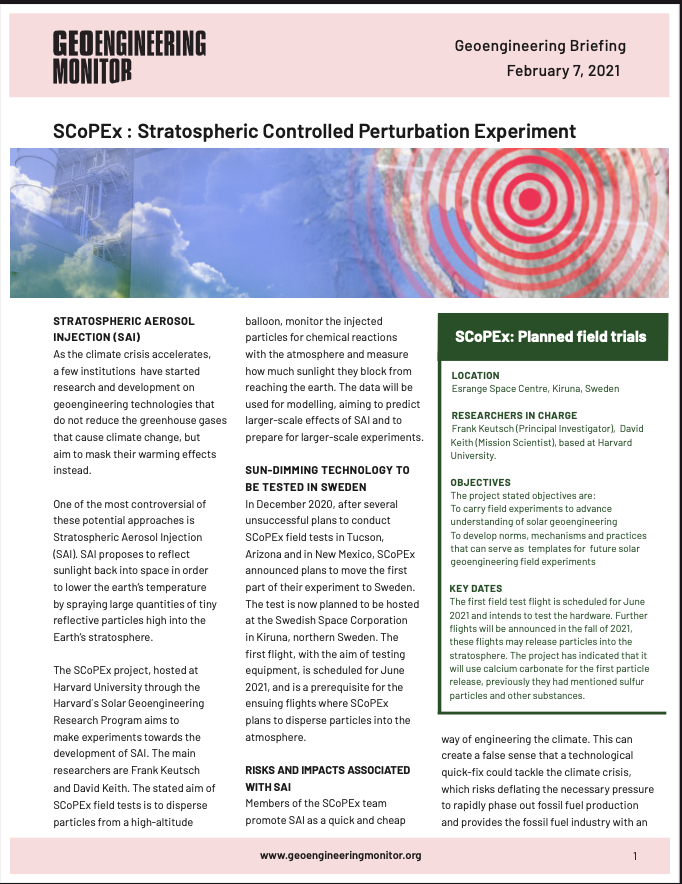 Each of these reasons are serious enough to disqualify solar geoengineering as an option. 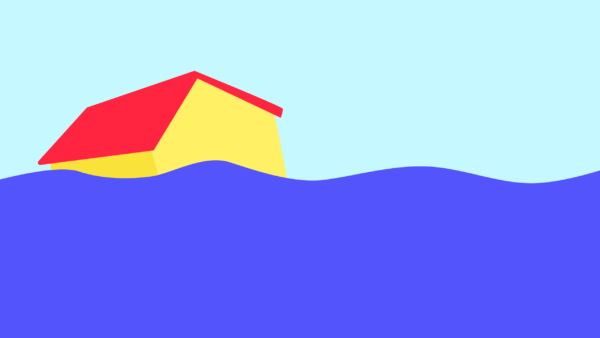 #1. Droughts, floods, changing monsoon and threats to food and water for billions of people.

Dimming the sun by injecting particles into the sky will not dial back climate change – it will introduce massive new disruptions and further disturb already disrupted climate systems, with likely disastrous impacts on regional climates, ecosystems and peoples’ livelihoods. 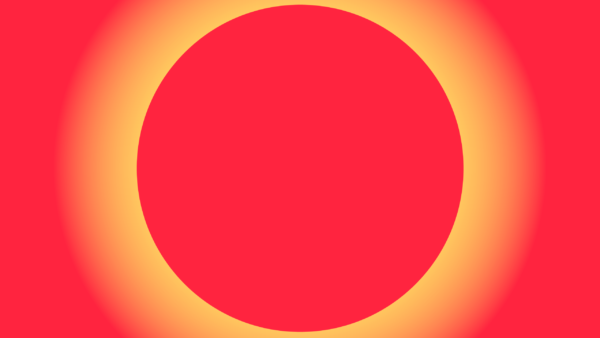 #2. The threat of devastating termination shock

If injections are stopped abruptly, decades or centuries worth of pent-up global heating would result in spiking temperatures almost immediately. Such a termination shock would rip earth’s societies and ecosystems apart. If we start relying on solar geoengineering we would likely have to continue for thousands of years, even as catastrophes mount. 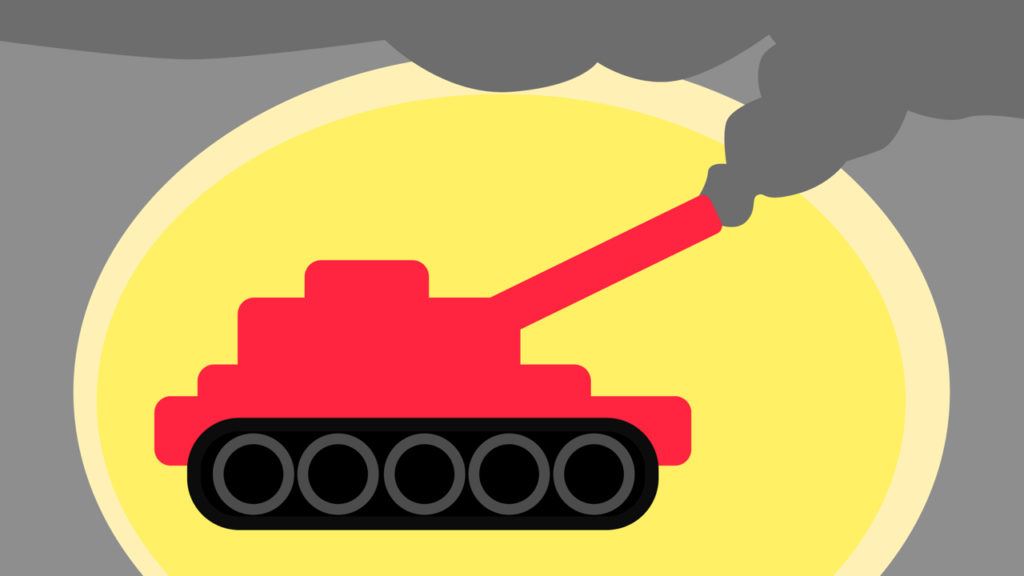 Solar geoengineering would require functional global governance systems for thousands of years – an impossible requirement. It would also create risks for international conflict and wars. Who would control the thermostat? What will happen when superpowers disagree? 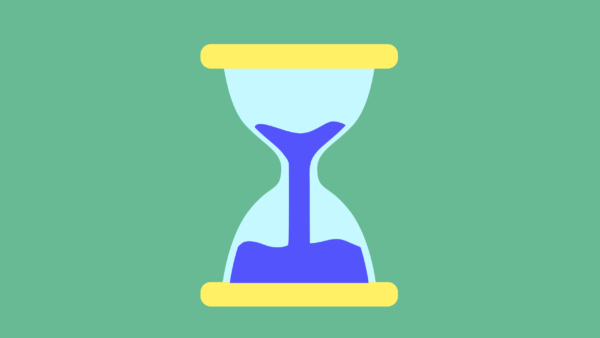 As people are starting to realise that society can and must decarbonize to real zero as quickly as possible, and that we already have the technology to do so, solar geoengineers provide fossil fuel producers and emitters with yet another excuse to delay and evade. 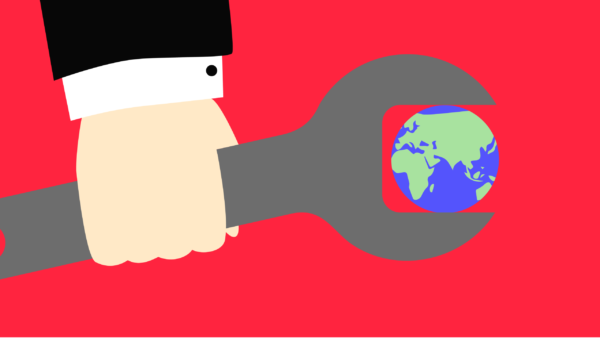 Solar geoengineering research is advanced by a limited clique of predominantly white, male researchers at elite universities, and wealthy philantropists based in the Global North, while impacts would be felt first and hardest by indigenous peoples and communities in the Global South. 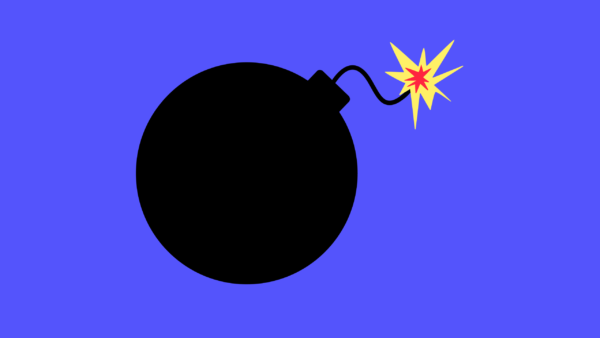 #6. A slippery slope down the abyss

Advancement of solar geoengineering technology must be halted now, before the idea becomes normalised, and before scientific careers, research funds, and vested and commercial interests become more consolidated, forcing the world down a slippery slope towards eventual deployment.

The unintended consequences are impossible to predict. Research will not eliminate the known risk or give us any way of addressing the unknown risks, which would only become evident after full-scale deployment.

The big risk in research is that it’s not just a distraction, but that it’s almost impossible to do expanded research without developing the technology that would make deployment possible. And once that technology is developed, it won’t be in the hands of the scientists, however well intentioned, to decide on whether it will be deployed, it will be somebody else…

Professor Raymond Pierrehumbet
University of Oxford
Read interview with further reflections on the problems with solar geoengineering research, why there is no plan B and implications for the global South and indigenous peoples.

The defeat of the SCoPEx projects plans for Sápmi, Northern Sweden

A stratospheric ballon flight to advance stratospheric aerosol injection (SAI) solar geoengineering technology on Saami people’s lands in Northern Sweden was cancelled on 31 March 2021, after outcry and mobilisation by Saami people together with Swedish and international civil society and scientists.

The SCoPEx project is controversial since it is a real-world experiment that intends to release particles in the atmosphere. While the first flight intended for June 2021 would not release particles, it’s sole purpose was to test equipment to enable release in subsequent flights. Yet, the Harvard-based SCoPEx project did not inform either the Swedish government or its agencies, nor the Saami indigenous people or the Swedish civil society or research community of their plans – despite having already faced fierce resistence from indigenous peoples in Arizona and New Mexico where the test was first supposed to happen.

After the surprise announcement by SCoPEx in December 2020 that it would move its experiment to Sweden, Swedish environmental organisations linked up with international civil society to take decisive action. They also joined forces with leading scientists who were as alarmed that geoengineering might be advanced in Sweden – a country that had played a decisive role in the establishment of the de facto moratorium on geoengineering under the Convention on Biological Diversity (CBD). Simultaneously, the Saami people, on whose lands the proposed experiment would take place, were alerted by both the indigenous peoples already fighting Scopex in North America, and by Swedish environmentalists.

Letters addressed to the Swedish government and the Swedish Space Corporation (SSC) – a state-owned for-profit company with expertise in stratospheric balloon flights that were Harvard’s counterpart in Sweden, set in motion an outcry of protests. A Guardian article on 8 February covering these letters spurred further international attention, followed by a letter to the Scopex ‘Advisory Committee’ by the Saami Council and Swedish CSOs demanding that no testing be done either in Northern Sweden or elsewhere, concluding that “Stratospheric Aerosol Injection research and technology development have implications for the whole world, and must not be advanced in the absence of full, global consensus on its acceptability.” 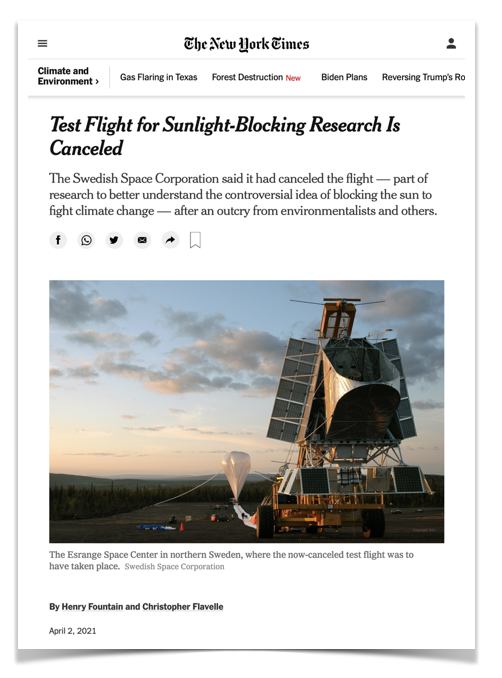 Scientists engaged directly with SSC, making it clear how controversial an issue SAI is, and how the project was to be understood as primarily a political advancement towards normalisation of the idea of SAI, with limited scientific and research value.

As the controversy and media attention escalated, the Swedish Space Corporation announced on 31 March that it had decided to cancel the flight. It concluded that it was not appropriate to conduct the flight since it had become evident that there is much controversy and no clear international common view as to whether this kind of research is appropriate (SSC is hence expected to refrain from any further engagement for the foreseeable future, since such common views will not form quickly, if ever).

The SCoPEx Advisory Committee however announced it would now initiate “a listening-based engagement activity in Sweden in order to help the Committee understand Swedish and Indigenous perspectives and make an informed and responsive recommendation about the equipment test flights” and that it had “recommended that the research team postpone the proposed platform launch until the Committee can complete the societal review. This will likely postpone the platform launch until 2022.” In media the SCoPEx project said it “would use the coming months to try and win over opinion in Sweden and build support for an eventual test.”

For Swedish civil society and the Saami people these statements further enshrine the problematic attitude of those advancing this technology. Their decision to pursue the project without any interaction with indigenous peoples or Swedish society in the first instance speaks for itself, as does the fact that only after the project has been cancelled is there a willingness to begin to engage. However, the key issue is not to what degree there is consultations and engagement, but rather that SCoPEx should listen to and respect the clear and principled rejection of the technology and project by both Saami people and civil society. A poorly designed and SCoPEx-controlled engagement process has no justification in this regard. Focus should rather be on how the SCoPEx project can best dismantle itself and/or reorient itself to other, more meaningful and acceptable activities.

Some related material and media – SCoPEx and Sweden

Letter to SCoPEx Advisory Board

Solar geoengineering is a threat to the planet, not a solution to climate change

The Hot Debate Over Solar Geoengineering and Its Impact on Climate

Some say we can 'solar-engineer' ourselves out of the climate crisis. Don't buy it.

Op-ed in The Guardian by Michael Mann and Raymond Pierrehumbert

In-depth article on the SCoPEx fight

The Enormous Risk of Atmospheric Hacking

Bill McKibben in The New Yorker

Should we ‘dim the sun’ to save the planet?

Privileged scientists are justifying their research by making claims that they might be able to fix injustices for the global poor in a way that does nothing to address the root causes of either climate vulnerability or global inequality, amounting to a form of ‘expert imperialism’